As I sit down to write this, I’m pleasantly distracted by the architectural tea leaves in a pot beside me of Master Liu’s Autumn Moon White Tea. This tea is from the leaves of 800-year-old trees on Mount Mengsong in China. It’s a very special tea from a very special shop.

The fact that we know who made it and where it comes from, is what Timothy d’Offay, founder of Postcard Teas, tells me, gives it provenance.

According to Rose Prince of the Good Food Producers Guide:

And Rose Prince, according to the Independent is:

The Oxford English Dictionary defines the word provenance as being from the French verb provenir ‘to come or stem from’, and specifically “the place of origin or earliest known history of something.” The term is commonly used in the wine, arts, and antiques worlds. And, as Tim tells me, compared to tea,

The Postcard Teas shop, just off New Bond Street in London, sells some of the finest teas in the world – and it’s all clearly labelled to show who makes it and where it’s from. In other words, all its teas have provenance.

I discovered this tea haven about a year ago and have been addicted ever since.

I was delighted to have the opportunity this week to sit down with Tim, over a cup of tangy Green Mulberry Tea, and discuss his tea business with him. This tea by the way is made by the Ziamese sisters in North Eastern Thailand.

Where does your passion for tea come from?

Tim lived and studied in Japan twenty years ago and took frequent trips to Taiwan, and Hong Kong. It was, he says,

it was these experiences that instilled an interest in tea”

He came back to the UK around 15 years ago and initially worked, by default, in the coffee trade.

Tim consummated his love for tea by travelling to and studying the master tea makers in India, Sri Lanka, and China. He then set up a series of tea ventures including one that imported and sold tea in the pioneering days at London’s now world-class Borough Market.

When did you start Postcard Teas & what does it stand for?

The tea is among the finest available anywhere in the world and it all has provenance: every packet sold carries the name of the maker or estate’s name, and the place of production.

We are still the only tea company in the world to offer proper provenance.”

Tim makes a point of visiting and building relationships with all his producers. He regularly visits India, Sri Lanka, Korea, China, Vietnam, Taiwan, and Japan to work with some of the world’s finest small scale family tea producers. He writes about his travels on the website.

In Japan, Taiwan, Korea, and China few heritage teas are made on farms larger than 10 acres and many are under 5 acres. Unless these small farms and farmers can find a strong local market prepared to pay more for smaller production better quality teas, the huge loss of young people in these countries to the cities will continue and we will find fewer and fewer family tea farms making tea in small batches.”

The postcard theme refers to the fact that

the teas are available in caddies or our unique Tea Postcard packs which can be sent anywhere in the world by posting them in our very own red postbox.”

I suggest you take a look at the website to see for yourself the sheer range of rare and wonderful teas on offer.

What was your single biggest challenge in getting started?

Despite help from family and friends, it was … getting people through the door. You have to be able to keep your nerve and belief when just one person comes in all day.”

He adds that over time however

existing customers became repeat customers and they spread the word.”

Retail sales are split about 85% offline, with the balance increasingly transacted online,

especially for repeat business for those who buy in the shop the first time.”

It turns out that of those buying physically in the shop, virtually all of them make it a deliberate and researched destination. Hardly anyone walking past by accident decides to come in and buy on a whim.

Experience has shown that

many buyers are not interested in provenance, just price. People are not yet ready to pay more for their tea at the supermarket. And I can understand that.”

Nowadays he’s happy for ‘the right’ wholesale customers to seek him out.

How do you market your tea?

No budget, no advertising”

he adds. Instead, existing customers and tea aficionados spread the word. A quick search on Google reveals very positive exposure in the Financial Times, Timeout and lots of others in the mainstream press, and on blogs. I just Googled “tea” and the company ranks 4th on the first page, ahead of both Twinings and PG Tips. Impressive by any standards.

required to compete with established global brands, if not on a completely level playing field.

What else do you sell?

And then there are the tastings, bespoke blends and tea tours.

The beautifully made brass and copper Japanese tea caddies catch my eye in the shop. The combination of beauty and precision is breathtaking. Tim explains that he

works direct with the Japanese craftsmen, and like the tea, the caddies come from where they’re supposed to come from.”

What do you say to someone who wants to start their own business?

It’s super-important to have a belief … and for others around you to be affirming your belief.”

He adds that by helping others out along the way, goodwill is reciprocated. Building a community in this way is incredibly helpful for all concerned.

What is the biggest challenge right now?

Doing new things, doing them well, and bringing the customers along with us is always a challenge”

he says. He adds that the biggest task right now though is focussing and making the Postcard Teas message as clear as possible. He explains that he’s aiming for his message to do two things:

He talks about how he was listening recently to an interview with John Cleese who was talking about the early days of Fawlty Towers, the classic British TV sitcom, and how it took what seemed like an eternity for people to ‘get it’. But once they did, once the tipping point had been reached, success became unstoppable.

We also talked about how Apple’s sales flatlined for a long time before they reached their current levels. How Apple have always had committed, super-loyal, almost fanatical customers. And, how Apple’s products are not about the hardware and features but the image, the vision they represent. That’s what people love to buy; Apple are not selling a feature list.

What is your attitude to growth?

We could easily grow by working with larger producers but that would make no sense for us.”

How to reach Postcard Teas…

Postcards Teas are on the web at: http://www.postcardteas.com/

These are the words, transcribed by gapingvoid, from Apple’s 1997-2002 iconic Think Different campaign: By gapingvoid And, the video above is a version of the ad narrated by 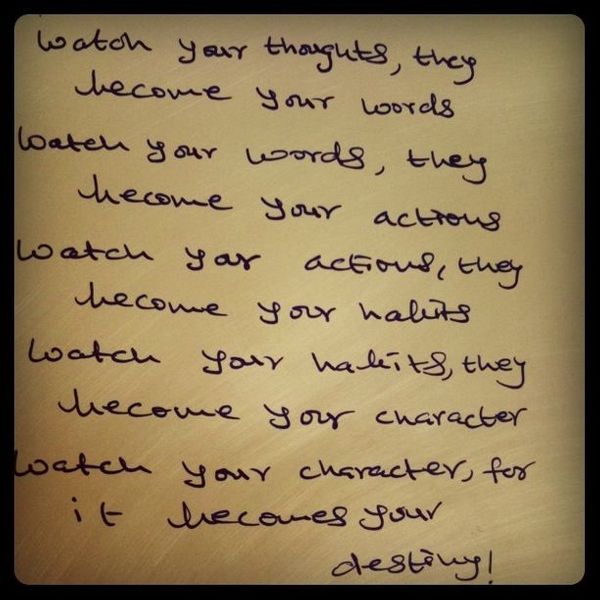 It was my wedding anniversary a few days ago. My mother-in-law gave us a booklet, and inside the front cover is a hand-written message from her meditation teacher, the remarkable